A Cult Expert Explains What's New in Cults for 2018

If you're in Australia, don't join something called  "Providence."

Note: the author was flown to this interview for the release of Far Cry 5

Liz was at a shopping centre in her hometown of Canberra when a woman with a big smile asked if she was a model. Feeling flattered, Liz stopped to talk and agreed to fill out a form for what she thought was a fairly innocuous Christian group. But just three years later, Liz was on SBS VICELAND’s The Feed, recounting how this moment led her into a cult.

“I didn’t think I was joining anything,” she told reporter Joel Tozer. “They said they were doing a Christian arts show. They emailed me some pictures and it looked wonderful, it looked awesome, so I said I’d meet up with them to talk about maybe participating.”

The group she was speaking with calls themselves the Christian Gospel Mission, but they’re more widely known by their previous names: Providence and Jesus Morning Star (JMS). They began in South Korea in 1980 and they believe their founder, Jung Myung-seok, is the second coming of Christ. In stark contradiction, Jung has has spent the past 10 years in jail for rape.

“They told us that he was in prison because he was being persecuted and falsely accused,” Liz explained.

Eight months after first filling in a form, Liz moved into a shared house owned by JMS. A year later she visited Jung Myung-seok in jail, and was gifted a pearl necklace that she was told symbolised a vagina. “Jung is just women-obsessed and sex obsessed," she explained. “I guess he just wanted his women to wear things that symbolised him.”

Finally, she was hospitalised with an eating disorder. While recovering at her mum’s house, a US cult expert by the name of Rick Ross was hired to try an intervention. Luckily it worked, and Liz left JMS in 2013. “The only way I could describe it was rape,” she said of the two-year experience. “Even though it wasn’t physical—it was mental and it was emotional and it was spiritual rape. I just felt violated.”

Now several years later, Rick Ross believes that JMS is the single most dangerous cult in Australia. “Jung Myung-seok has just been released from prison and he hasn’t changed, as far as I know,” he tells me. “And for some reason his group has been recruiting in Australia pretty hard.” 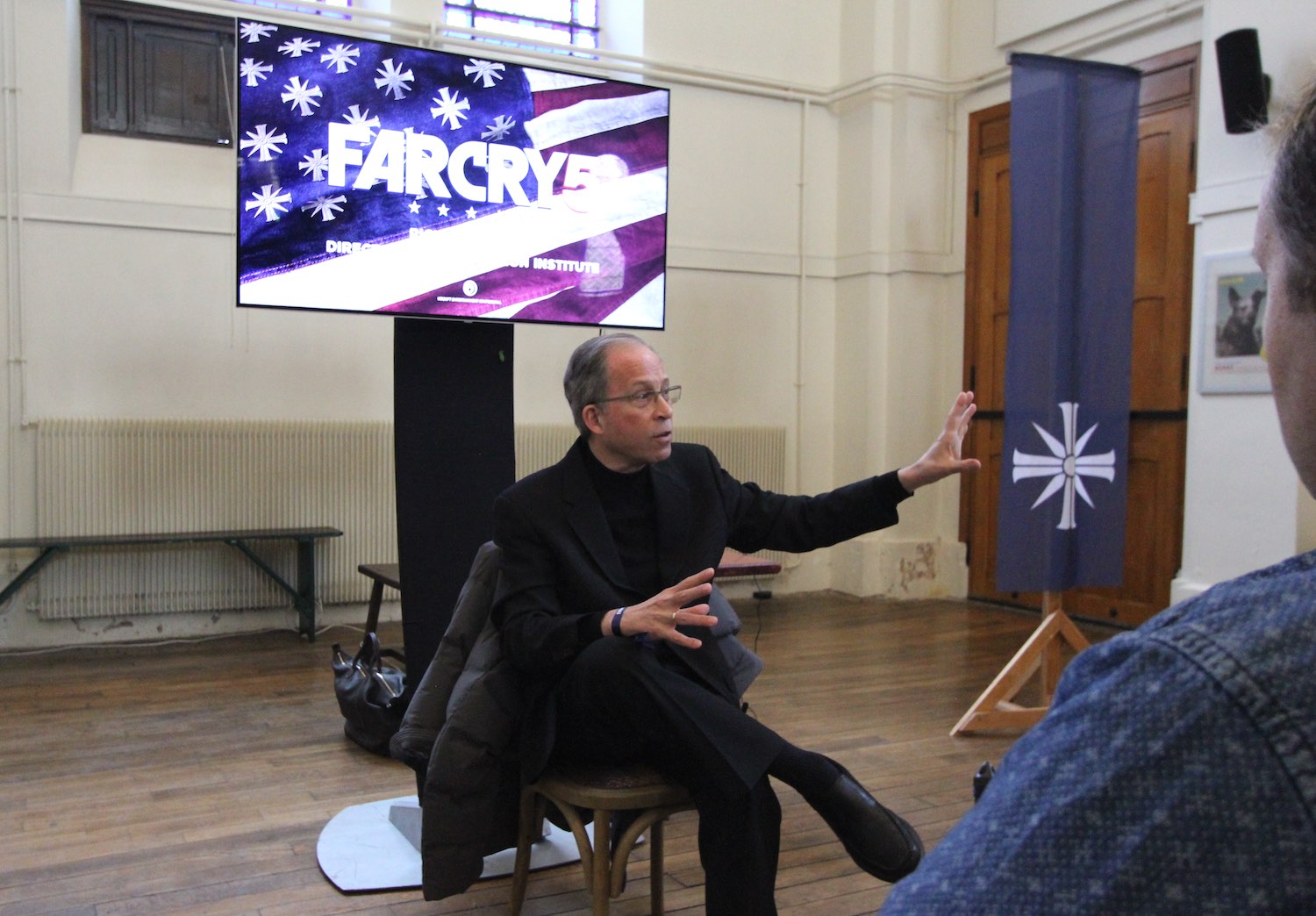 Rick explaining his work on the game

I’m meeting Rick at a media event in Paris. He’s an academic-looking guy with glasses, a blazer, and an accent that he tells me originated in Arizona. He’s been extracting people from cults for more than 30 years, and he approaches the subject of indoctrination in a thoughtful, evidence-based way, while still indulging my fascination with weirdness. And I guess this is why Rick has appeared in several documentaries, and has now assisted with the creation of a video game.

So, let’s pause here. We’ll come back to cults in a moment, but I just want to provide the branded backstory on how I came to meet Rick.

Rick has just finished consulting on video game called Far Cry 5. Rick was hired by the game’s developers, Ubisoft, to help their team create a fictional cult. The cult they invented is a fairly garden variety of Christian fundamentalists, holed up in the hills of Montana and armed to the teeth. Players assume the role of a local police rookie, assigned to helicopter in and arrest the group’s leader, which is a plan that quickly goes pear-shaped. And as you play you can’t help but notice how the game dances with history. There’s a bit of Congressman Leo Ryan’s disastrous 1976 visit to Jonestown. And there’s a lot of the 1993 siege on the Branch Davidians in Waco.

Rick’s job was to guide the development team on creating a cult and situation that was fictional, but steeped in enough precedents to feel scary. “So the guys at Ubisoft would ask me things like ‘Has a cult ever done something like this?’ and then they’d give me an example of something they were considering, and I’d say ‘Yes, but actually there have been even worse examples than that’—and that’s how I helped out.”

So I’m meeting Rick at the Far Cry 5 media event in Paris, which I see as an opportunity to get the lowdown on how cults are recruiting and operating in 2018.

“A cult can now completely exist on the web,” he says. “There’s a woman named Sherry Daniels and she runs something called the Miracle School. Sherry sells miracles via PayPal and they can end up being a lot of money. One complaint I received, someone had spent $25,000 in a few months, only for Sherry to pull them into a magical world where they were detached from reality. And things like this are just as destructive as more traditional cults.”

In this way Rick says that cults in 2018 are often harder to pin down, while on the upside the internet arms followers with far more information. “I’m getting more emails from people saying ‘Hey, I was with this group and going to their meetings, but then I googled them and sure enough they were in your database. And I decided hey, screw them.’”

Related: check out our VICE doco on a Siberian cult leader.

But the constant factor, says Rick, regardless of whether a group is old or new, is that they’re built around the gravity of an individual. This is the case for JMS in Korea, and it was the case for the Branch Davidians in Texas, or Jonestown in Guyana. These organisations are created around the idea that their leader has a direct line with god, and therefore what they say is gospel. “What’s interesting is that some gurus are frauds and they know it,” says Rick. “But in many cases, the leaders of these groups believe that they’re actually god-like.”

Rick says he worked hard with the Ubisoft team, writing a believable cult leader and antagonist for Far Cry 5. The result was a character named Joseph Seed, who—between believing his own fantasies and wanting to make the world a better place—achieves a very familiar, human type of evil. “I watch some of the promotional clips of this character,” says Rick, “and it’s incredible how right they got that kind of psychology.”

I ask Rick what he’s learned about cult followers after more than 30 years, and he doesn’t even hesitate. “The human mind is far more fragile than we wish to admit,” he says decisively. “Anyone can be had by a destructive cult given the right set of circumstances and timing.”

He tells me that one vulnerability people don’t even realise they have is arrogance. “It’s like saying 'An STI will never happen to me.' People think they’re superman, so they don't recognise the symptoms when it starts to go wrong. They’re so sure ‘This couldn’t happen to me’ that they don’t even realise it’s happening.

“But do you think you’re winning?” I ask. “And especially when the idea of cults are so completely embedded in popular culture—are cults finding it harder to function?”

Rick tells me that it’s a hard thing to measure, but one way is to see how hard cults fight back, through both lawsuits and through general threats. “And right now, I would say the resistance bar is quite high.”

He talks about being sued five times by five different groups, one of which spent about $5 million in the process. But his favourite example is the group who spent months collecting his garbage trying to find some dirt on him. “The person responsible for trash in my apartment was selling it to this cult, and I found this out in Federal Court. The fact this happens tells me the resistance meter is high. So, I must be doing something right.”

Far Cry 5 launches in Australia on March 27 (today!) And you can follow Julian on Twitter for more of this kind of thing.