The biggest political problem in America, explained in one chart

Republicans and Democrats don’t just disagree on the issues, though of course they do. Americans are divided on which issues are important in the first place.

That was the unmistakable finding of a new survey from the Pew Research Center. The research outfit polled 10,000 Americans, about a month before the 2018 midterms. The survey found that, when you break Americans out by political party, they often have totally different notions about what the biggest issues facing the country are.

This chart sums it up better than I ever could: on race, on climate change, on gun violence, on illegal immigration, Republicans and Democrats are irreconcilably divided over whether those issues are even important at all. 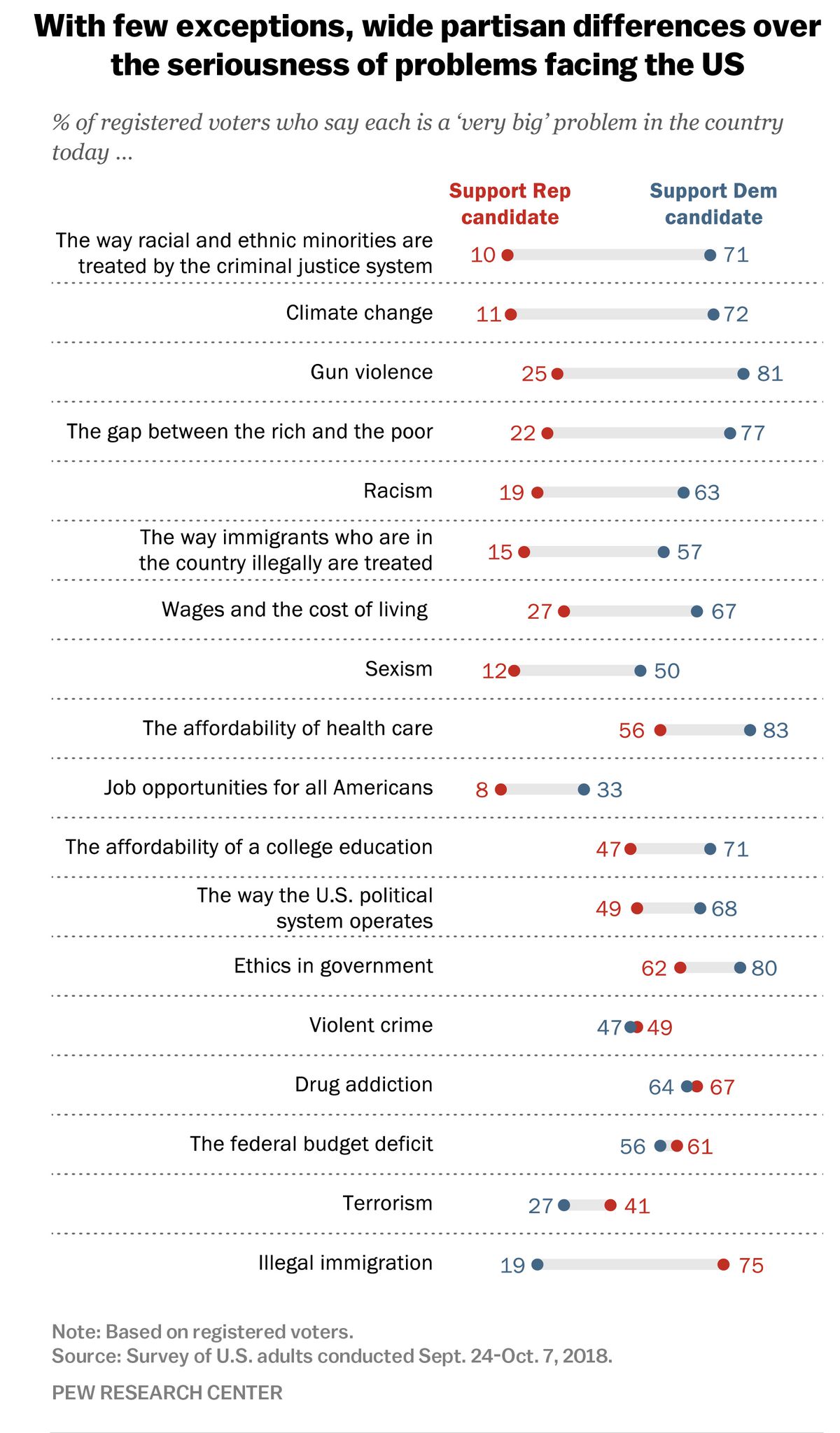 Even an issue like “wages and the cost of living” — which might sound like rote economic concerns — 67 percent of Democrats think they are a very big problem, while just 27 percent of Republicans agree.

The two parties do overlap on a few things. More than 60 percent of Democrats and Republicans believe drug addiction is a major problem. Voters from both parties are worried about violent crime. They’re also both, oddly enough, concerned about the federal deficit.

But on the issues that usually dominate the discourse, Americans can’t agree on what we should be talking about.

We usually think about the policy gaps between the parties. On gun control, for example, Democrats support universal background checks and assault weapons bans; Republicans oppose those measures. But it’s more than that: Only 25 percent of Republicans think gun violence is a very important problem for the country to tackle.

You could say the same for climate change or income equality. On the latter, 77 percent of Democrats think it’s a big problem — and only 22 percent of Republicans say the same.

We typically think of political polarization in terms of parties: True swing voters are disappearing, as Americans drift apart ideologically. We have all become more uniformly Republican or Democrat. We even think of polarization in terms of geography, with more and more like-minded voters congregating and living near each other. We might see the Democratic flirtation with socialism or the Republican obsession with cutting corporate taxes and conclude that, on any given issue, the gap between the two parties is just too big to breach.

But the gap is still bigger than that. Americans disagree about which issues are worthy of debate. Some of that can likely be traced to this heavy sorting between the parties: Democrats are more likely to be people of color or women, so it makes sense that they would be more concerned with racism or sexism (50 percent of Democrats versus 12 percent of Republicans).

But this division on what the right questions are seems deeply embedded. If the problem of polarization is ever to be addressed, we have to figure out how to talk to people who don’t just disagree about the best way to solve problems, but disagree about what the problems are to begin with.