Your brain is not a computer / Твой мозг — не компьютер

Face It, Your Brain Is a Computer 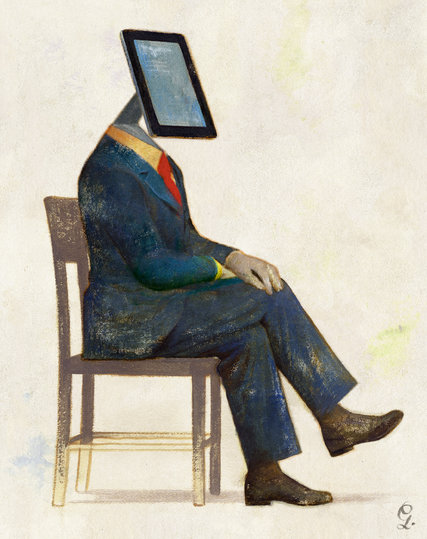 SCIENCE has a poor track record when it comes to comparing our brains to the technology of the day. Descartes thought that the brain was a kind of hydraulic pump, propelling the spirits of the nervous system through the body. Freud compared the brain to a steam engine. The neuroscientist Karl Pribram likened it to a holographic storage device.

Many neuroscientists today would add to this list of failed comparisons the idea that the brain is a computer — just another analogy without a lot of substance. Some of them actively deny that there is much useful in the idea; most simply ignore it.

Often, when scientists resist the idea of the brain as a computer, they have a particular target in mind, which you might call the serial, stored-program machine. Here, a program (or “app”) is loaded into a computer’s memory, and an algorithm, or recipe, is executed step by step. (Calculate this, then calculate that, then compare what you found in the first step with what you found in the second, etc.) But humans don’t download apps to their brains, the critics note, and the brain’s nerve cells are too slow and variable to be a good match for the transistors and logic gates that we use in modern computers.

If the brain is not a serial algorithm-crunching machine, though, what is it? A lot of neuroscientists are inclined to disregard the big picture, focusing instead on understanding narrow, measurable phenomena (like the mechanics of how calcium ions are trafficked through a single neuron), without addressing the larger conceptual question of what it is that the brain does.

This approach is misguided. Too many scientists have given up on the computer analogy, and far too little has been offered in its place. In my view, the analogy is due for a rethink.

To begin with, all the standard arguments about why the brain might not be a computer are pretty weak. Take the argument that “brains are parallel, but computers are serial.” Critics are right to note that virtually every time a human does anything, many different parts of the brain are engaged; that’s parallel, not serial.

But the idea that computers are strictly serial is woefully out of date. Ever since desktop computers became popular, there has always been some degree of parallelism in computers, with several different computations being performed simultaneously, by different components, such as the hard-drive controller and the central processor. And the trend over time in the hardware business has been to make computers more and more parallel, using new approaches like multicore processors and graphics processing units.

Finally, there is a popular argument that human brains are capable of generating emotions, whereas computers are not. But while computers as we know them clearly lack emotions, that fact itself doesn’t mean that emotions aren’t the product of computation. On the contrary, neural systems like the amygdala that modulate emotions appear to work in roughly the same way as the rest of the brain does, which is to say that they transmit signals and integrate information, and transform inputs into outputs. As any computer scientist will tell you, that’s pretty much what computers do.

Of course, whether the brain is a computer is partly a matter of definition. The brain is obviously not a Macintosh or a PC. And we humans may not have operating systems, either. But there are many different ways of building a computer.

The real payoff in subscribing to the idea of a brain as a computer would come from using that idea to profitably guide research. In an article last fall in the journal Science, two of my colleagues (Adam Marblestone of M.I.T. and Thomas Dean of Google) and I endeavored to do just that, suggesting that a particular kind of computer, known as the field programmable gate array, might offer a preliminary starting point for thinking about how the brain works.

FIELD programmable gate arrays consist of a large number of “logic block” programs that can be configured, and reconfigured, individually, to do a wide range of tasks. One logic block might do arithmetic, another signal processing, and yet another look things up in a table. The computation of the whole is a function of how the individual parts are configured. Much of the logic can be executed in parallel, much like what happens in a brain.

Although my colleagues and I don’t literally think that the brain is a field programmable gate array, our suggestion is that the brain might similarly consist of highly orchestrated sets of fundamental building blocks, such as “computational primitives” for constructing sequences, retrieving information from memory, and routing information between different locations in the brain. Identifying those building blocks, we believe, could be the Rosetta stone that unlocks the brain.

To put this differently, it is unlikely that we will ever be able to directly connect the language of neurons and synapses to the diversity of human behavior, as many neuroscientists seem to hope. The chasm between brains and behavior is just too vast.

If neurons are akin to computer hardware, and behaviors are akin to the actions that a computer performs, computation is likely to be the glue that binds the two.

There is much that we don’t know about brains. But we do know that they aren’t magical. They are just exceptionally complex arrangements of matter. Airplanes may not fly like birds, but they are subject to the same forces of lift and drag. Likewise, there is no reason to think that brains are exempt from the laws of computation. If the heart is a biological pump, and the nose is a biological filter, the brain is a biological computer, a machine for processing information in lawful, systematic ways.

The sooner we can figure out what kind of computer the brain is, the better.

Gary Marcus, a professor of psychology and neural science at New York University, is the editor of “The Future of the Brain.”

A version of this op-ed appears in print on June 28, 2015, on Page SR12 of the New York edition with the headline: Face It, Your Brain Is a Computer. Today's Paper|Subscribe