Joëlle Proust is an Emeritus CNRS Director of Research at Institut Jean-Nicod, Ecole Normale Supérieure, in Paris. She published The Philosophy of Metacognition in 2013, and co-edited in 2012 a collective volume entitled The Foundations of Metacognition. In this post, she presents a new collective book co-edited with Martin Fortier, Metacognitive Diversity: Interdisciplinary approaches. 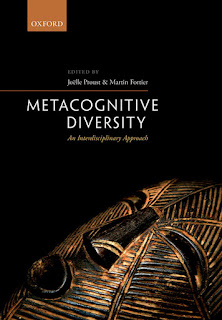 The control and monitoring of one's own cognitive actions is called "metacognition". For example, try to remember Mark Twain's original surname. If you fail to retrieve it immediately, you may have the feeling that you will soon do: you have a "feeling of knowing". Other metacognitive feelings include the feeling of familiarity (when seeing a face), of understanding (an utterance), of being right (in drawing a conclusion) – with their negative versions: unfamiliarity, puzzlement, feeling of error. Other feelings lead you to decide whether or not to perform a task as a function of its apparent ease or difficulty.

Studying such feelings is an important topic for philosophers of mind, because attempting to articulate a state of uncertainty with its target belief leads to revise received views about cognitive architecture. Metacognitive feelings also have a central relevance to epistemology. They raise the question of the nature of the epistemic norms that regulate our feelings of knowing, of understanding, of clearly perceiving an object, and of the role of affect in rationality.

Because metacognitive feelings guide our judgments about what seems true, interesting, cognitively easy to do, (or about what seems boring, incoherent or too difficult for us), they play a considerable role in our daily lives as well as in our epistemic practices. Western philosophers until now have tended to assume that the intuitions they have concerning the meaning of concepts are universally shared across cultures. This assumption is foundational for much of the work conducted in analytic philosophy.

Similarly, cognitive scientists have tended to assume that participants in experi¬mental paradigms belonging to Western, Educated, Industrialized, Rich, and Democratic societies ( for short: "WEIRD" participants)  do not differ, in their way of processing information, from the much larger set of participants who do not belong to the "WEIRD" group.  This assumption was proven false in the few domains where it was tested, such as attentional mechanisms and moral cognition. Similarly, in philosophy, conceptual intuitions were found not to be as plainly universal as assumed – but again, few of them have been so far tested across cultures.

The present book aims to expand our knowledge of metacognitive diversity, including the diversity in the report of conceptual intuitions and in epistemic decision-making. Do people feel uncertain in the same circumstances? Do all cultures encourage children to ask explanatory questions?  Do norms such as truth, coherence and relevance also vary across cultures? Or are they, rather, stable standards applying to quite different practices? The essays collected here address these questions from the viewpoints of linguistics, anthropology, philosophy, developmental, experimental, social psychology, and neurosciences.

Here are some findings worth philosophical attention. It is obvious that epistemic practices in which people engage vary across cultures. Prediction, for example, can be achieved by way of natural oracles, supernatural helpers, by mere observation, and by scientific methods. What is less obvious is that one is sensitive to what matters most, in epistemic matters, as a function of the dominant forms of learning – observational or formal –  to which one has been exposed from infancy.

Of particular significance, in epistemic diversity, are the interactions one has had with one's parents (face to face, or group-based), and on the implicit maxims of communications that organize informational exchanges in a group (and the extent to which they significantly differ from the Gricean model).  The book also details specific forms of metacognitive practices, such as prayer, meditation, or sensory deprivation, that are used in some cultures to regulate individual's attention, enhance self-consistency or favour the endorsement of consensual accounts of ritual events.

Apparently similar epistemic practices, such as formal learning, however, may substantially differ in their underlying norms, with a major contrast between "individualist", WEIRD, practices, where only individual epistemic competence counts, and Eastern "collectivist" practices, which are regulated  in addition by social norms such as in-group harmony and moral development.

Even if truth and the other epistemic norms, such as fluency, coherence, and plausibility, apply to widely different representations across cultures, their underlying conditions of applicability do not seem to substantially vary. It is striking, in particular, that when a norm of consensus (what a majority in the group takes to be the case) conflicts with a norm of truth (what is judged to be the case by individuals on the basis of evidence or inference), individuals are aware of the conflict, but tend to solve it by taking a group-centred viewpoint and disregard potential variations in epistemic expertise.

When incompatible explanatory models are available to people in a given group, (such as religious versus scientific causal explanations), common reasoning strategies are used for attempting to reduce the resulting incoherence.