Steven Pinker: Identity Politics Is 'An Enemy of Reason and Enlightenment Values' 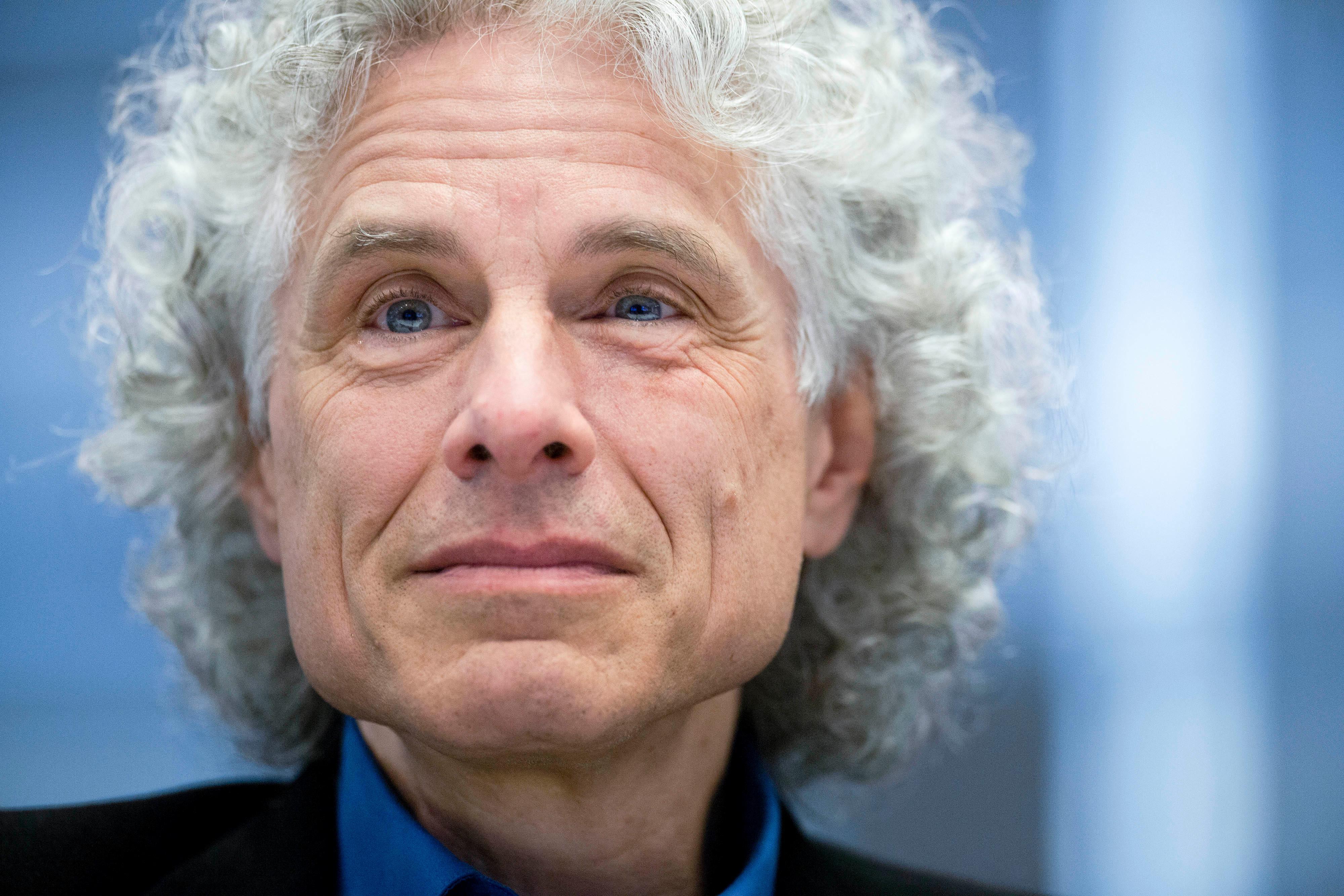 Renowned professor of psychology at Harvard and a prolific writer, Steven Pinker is the author of several prize-winning books, including The Language Instinct, How the Mind Works, The Blank Slate, and The Better Angels of Our Nature. This week Pinker releases a new book, Enlightenment Now: The Case for Reason, Science, Humanism, and Progress . I chatted over email with Professor Pinker and asked him some questions on his new book and contemporary politics.

Steven Pinker: Identity politics is the syndrome in which people’s beliefs and interests are assumed to be determined by their membership in groups, particularly their sex, race, sexual orientation, and disability status. Its signature is the tic of preceding a statement with “As a,” as if that bore on the cogency of what was to follow. Identity politics originated with the fact that members of certain groups really were disadvantaged by their group membership, which forged them into a coalition with common interests: Jews really did have a reason to form the Anti-Defamation League.

But when it spreads beyond the target of combatting discrimination and oppression, it is an enemy of reason and Enlightenment values, including, ironically, the pursuit of justice for oppressed groups. For one thing, reason depends on there being an objective reality and universal standards of logic. As Chekhov said, there is no national multiplication table, and there is no racial or LGBT one either.

This isn’t just a matter of keeping our science and politics in touch with reality; it gives force to the very movements for moral improvement that originally inspired identity politics. The slave trade and the Holocaust are not group-bonding myths; they objectively happened, and their evil is something that all people, regardless of their race, gender, or sexual orientation, must acknowledge and work to prevent in the future.

Even the aspect of identity politics with a grain of justification—that a man cannot truly experience what it is like to be a woman, or a white person an African American—can subvert the cause of equality and harmony if it is taken too far, because it undermines one of the greatest epiphanies of the Enlightenment: that people are equipped with a capacity for sympathetic imagination, which allows them to appreciate the suffering of sentient beings unlike them. In this regard nothing could be more asinine than outrage against “cultural appropriation”—as if it’s a bad thing, rather than a good thing, for a white writer to try to convey the experiences of a black person, or vice versa.

To be sure, empathy is not enough. But another Enlightenment principle is that people can appreciate principles of universal rights that can bridge even the gaps that empathy cannot span. Any hopes for human improvement are better served by encouraging a recognition of universal human interests than by pitting group against group in zero-sum competition.

AR: There is, as you recognize a “liberal tilt” in academia. And you write about it: “Non-leftist speakers are frequently disinvited after protests or drowned out by jeering mobs,” and “anyone who disagrees with the assumption that racism is the cause of all problems is called a racist.” How high are the stakes in universities? Should we worry?

SP: Yes, for three reasons. One is that scholars can’t hope to understand the world (particularly the social world) if some hypotheses are given a free pass and others are unmentionable. As John Stuart Mill noted, “He who knows only his own side of the case, knows little of that.” In The Blank Slate I argued that leftist politics had distorted the study of human nature, including sex, violence, gender, childrearing, personality, and intelligence. The second is that people who suddenly discover forbidden facts outside the crucible of reasoned debate (which is what universities should be) can take them to dangerous conclusions, such as that differences between the sexes imply that we should discriminate against women (this kind of fallacy has fueled the alt-right movement). The third problem is that illiberal antics of the hard left are discrediting the rest of academia, including the large swaths of moderates and open-minded scholars who keep their politics out of their research. (Despite the highly publicized follies of academia, it’s still a more disinterested forum than alternatives like the Twittersphere, Congress, or ideologically branded think tanks.) In particular, many right-wingers tell each other that the near-consensus among scientists on human-caused climate change is a conspiracy among politically correct academics who are committed to a government takeover of the economy. This is sheer nonsense, but it can gain traction when the noisiest voices in the academy are the repressive fanatics.

AR: You write that “globalization helped the lower and middle classes of poor countries, and the upper class of rich countries, much more than it helped the lower middle class of rich countries. Of the claim that only the rich are doing well, while everyone else is “stagnating or suffering,” you write “most obviously, it’s false for the world as a whole: the majority of the human race has become much better.” How should American domestic politics reflect this fact: That our planet, however grim it may look, is fairly prosperous? Are conventional, free-market economics actually working?

SP: This is an acute dilemma. If you are a morally serious person—whether a humanist or a Judeo-Christian, who believes that all human lives have equal value—then policies that lift billions of people out of crushing poverty at the expense of millions of Americans who are laid off from factory jobs are a moral no-brainer. But of course it would be political suicide for an American politician to consider this tradeoff for millisecond. Still, there are other America-centric reasons to favor globalization: cheaper goods for hundreds of millions of American consumers; bigger markets for American exporters; and the greater stability of a richer world, with fewer migrants, epidemics, and insurgent movements.

As for free-market economics, it depends on what you mean by “conventional.” We know that markets make countries freer, richer, and happier compared to totalitarian central planning, but we also know that the habit among both the hard left and hard right to equate capitalism with anarcho-capitalism (no regulation, no social spending) is wrong. You can be in favor of free markets with regulations, just as you can be in favor of free societies with criminal laws. Even the freest of free marketeers has to acknowledge that markets don’t provide a decent living to those with nothing to offer in exchange, such as the young, old, sick, and unlucky, and they also have to acknowledge that markets alone fail to protect public goods that no one owns, such as the atmosphere. Not surprisingly, all wealthy capitalist countries have extensive social spending and regulation. And as a Canadian I can confirm that free-market societies with greater social spending and regulation than the United States are not grim dystopias sliding down a slippery slope to Venezuela, but are rather pleasant places to live, with greater happiness and longevity, and less violent crime, abortion, sexually transmitted diseases, and educational mediocrity.

AR: In the 23rd chapter, your last, you discuss “humanism.” You define humanism as: “the goal of maximizing human flourishing—-life, health, happiness, freedom, knowledge, love, richness of experience.” How should we differentiate between humanism and transhumanism? What if, in the end, “human flourishing,” makes us, for the sake of progress, less “human”? Does this worry you? Is human nature fixed? Can it, or should it, be reengineered?

As for “transhumanism,” I’m skeptical about that we’re going to see enhancements of human nature by genetic engineering, nanotechnology, or neural implants (though these technologies may be used to mitigate disabilities, a different matter). We now know that there is no “gene for musical talent” that ambitious parents will implant into their unborn children—psychological traits are distributed across thousands of genes, each with a teensy effect, and many with deleterious side effects (such as a gene that makes you a bit smarter while increasing your chance of getting cancer). Also, people are risk-averse (sometimes pathologically so) when it comes to their children and when it comes to genetic engineering—they don’t accept genetically modified tomatoes, let alone babies. More generally, biomedical progress in the real world is more Sisyphus than Singularity. Readers of medical newsletters are regularly disillusioned by miracle cures that turn out to be no better than the placebo, or that wash out in the meta-analysis.

As for implants, neurosurgeons have a saying: “You’re never the same once the air hits your brain.” Invading a healthy brain with foreign objects, with the risk of inflammation and infection, is a really bad idea. And neuroscientists don’t have a clue as to how the brain encodes thoughts at the nano-level of synapses and neural firing, let alone a technology that would manipulate it with precision greater than a sledgehammer.

AR: You say that “reason is not a powerful part of human nature,” and you quote Baruch Spinoza, who said that “those who are governed by reason desire nothing for themselves which they do not also desire for the rest of humankind,” in a call of sorts to, or an explanation for why we should reason more, or, more clearly (or less clearly), to govern oneself through logos rather than eros or thumos, if you buy into Plato’s tripartite division of the soul. Where does your explanation leave the status of the human? How human is a human who separates himself from desire and spiritedness? Or is that not exactly the point?

SP: It's not the point. Reason has nothing to do with asceticism, joylessness, incuriosity, coldness, or callousness. That is because intelligence is logically distinct from motivation: an ability to figure out how best to get from A to B says nothing about what the B should be. Goals such as happiness, knowledge, love, beauty, and insight are in no way antithetical to reason. Indeed, reason can be a means to attaining the goals that are most valuable and enduring: to avoid fatal attractions, silver-tongued seducers, or charismatic despots that offer a short-term rush but long-term misery.

AR: What should the president be reading? And why?

SP: As much as I value reading, mere exposure to a book seldom enlightens a person or changes his mind; he (or she) must be immersed in a community of open-minded argument and debate. But to answer the rhetorical question: Let’s start with a book on democracy, including why we need checks and balances and an “administrative state” rather than empowering a ruler who thinks “I alone can fix it.” It would be hard to do better than The Federalist Papers. Then, a hard-headed book on nuclear weapons, like Richard Rhodes’s Arsenals of Folly or Ward Wilson’s Five Myths About Nuclear Weapons. And an equally hard-headed book on climate change, such as William Nordhaus’s The Climate Casino.
IDENTITY POLITICS
TODAY'S BLOGS
CONSERVATIVE NEWSSTAND
ADAM RUBENSTEIN
STEVEN PINKER
HOME PAGE
BOOKS AND ARTS
PSYCHOLOGY
ADAM RUBENSTEIN
Adam Rubenstein is an editorial assistant at The Weekly Standard, where he was previously assistant books and arts editor. Before the Standard, he was a Robert L. Bartley Fellow on the editorial page of the Wall Street Journal. Rubenstein holds a B.A. in political science from Kenyon College.