,” the clear intent of this conference was to take this moment of America’s racial reckoning, to shift the purpose of K-12 education from developing critical thinking to an emphasis on critical consciousness. 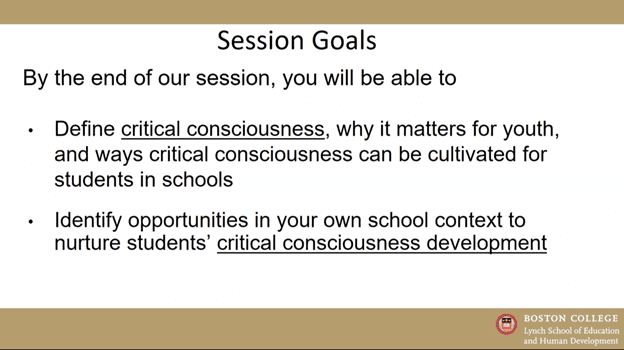 The term critical thinking was coined by philosopher John Dewey to capture the intellectual process used by Enlightenment intellectuals to understand the world. He extensively quoted Francis Bacon, John Locke, and John Stuart Mill in his description of this scientific approach to learning.

Critical theories reject the concept of “Enlightenment rationalism,” and substitute the power of story-telling. 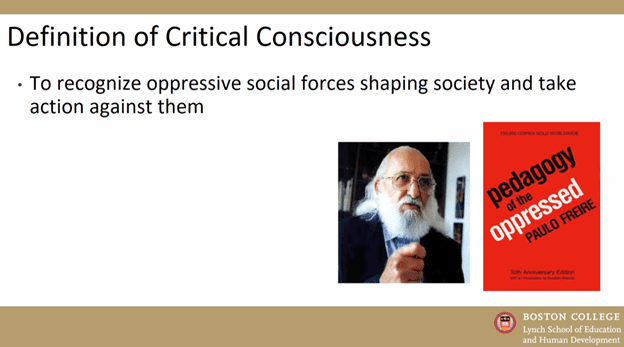 Critical Pedagogy is a critical theory created by Paulo Freire, Brazilian educator, and author of Pedagogy of the Oppressed. Freire believed that the traditional education system, with the teacher as the “sage on the stage,” was designed to produce workers to support the capitalist system, and perpetuate the oppression of the working class. He envisioned a participatory form of education.

As Henry Giroux, a disciple of Critical Pedagogy explains:

For Freire, pedagogy is not a method or an a priori technique to be imposed on all students but a political and moral practice that provides the knowledge, skills, and social relations that enable students to explore the possibilities of what it means to be critical citizens while expanding and deepening their participation in the promise of a substantive democracy.

Critical thinking for Freire was not an object lesson in test-taking, but a tool for self-determination and civic engagement. According to Freire, critical thinking was not about the task of simply reproducing the past and understanding the present. To the contrary, it was about offering a way of thinking beyond the present, soaring beyond the immediate confines of one’s experiences, entering into a critical dialogue with history, and imagining a future that would not merely reproduce the present.

Critical pedagogy attempts to understand how power works through the production, distribution, and consumption of knowledge within particular institutional contexts and seeks to constitute students as informed subjects and social agents.

Freire was acutely aware that what makes critical pedagogy so dangerous to ideological fundamentalists, the ruling elites, religious extremists, and right-wing nationalists all over the world is that central to its very definition is the task of educating students to become critical agents who actively question and negotiate the relationships between theory and practice, critical analysis and common sense, and learning and social change. Critical pedagogy opens up a space where students should be able to come to terms with their own power as critically engaged citizens; it provides a sphere where the unconditional freedom to question and assert is central to the purpose of public schooling and higher education, if not democracy itself. And as a political and moral practice, way of knowing, and literate engagement, pedagogy attempts to ‘make evident the multiplicity and complexity of history’ (Said, 2001, p. 141). History in this sense is engaged as a narrative open to critical dialogue rather than predefined text to be memorized and accepted unquestioningly. [emphasis added]

Critical consciousness is an entirely different frame of reference than critical thinking. As Columbia linguistics professor, John McWhorter, has posed the question: “Do you want your children taught that battling power differentials is the central endeavor of intellectual, moral and artistic endeavor?” [

Many think this debate is about how or what we teach in high school history classes, but the goal of these groups is to install curricula based on the precepts of Critical Pedagogy into all subjects in every grade from K-12. To demonstrate how this shift might be applied, a conference presenter offered the following example of a fifth-grade math problem: 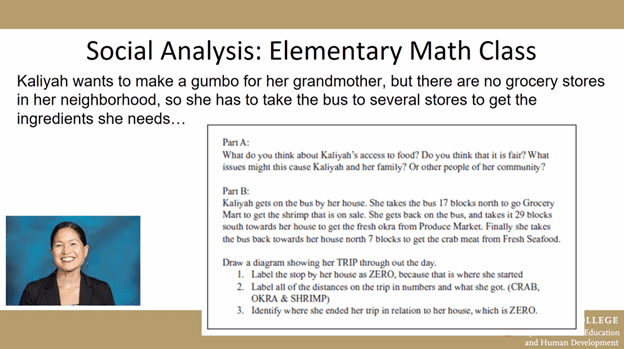 For a deeper dive into the concepts and strategies for infusing critical theories into K-12 education, see Kimberlé Crenshaw’s summer school program for educators.

Is the oppressor/oppressed dynamic the best or only way to think about society?

In college, I had a course on the effects of technological innovation on societies through history. On my bookshelves sits The Sea and Civilization, which is described by Amazon as, “A monumental retelling of history – through the lens of the sea – revealing in breathtaking depth how people first came into contact with one another by ocean, river, lake, and stream and how goods, languages, religions, and entire cultures spread across and along the world’s waterways bringing together civilizations and defining what makes us most human.”

There are numerous was to think about the interplay of our societal interconnections.

Alleged differentials of power are only one frame of reference for examining the world. Further, there are real questions as to what exactly constitutes oppression. Are unequal outcomes de facto proof of discrimination? Or, are there perhaps multiple overlapping causations?

And to clarify — I am for education reform in Connecticut, especially reform that focuses on making sure that all of our children, including those currently assigned to failing schools, have the opportunity to learn and thrive.

But the critical theory lens denies individuality. People are not individuals, but intersections of their multiple group identities. Are all people in an assigned group oppressed or oppressor? What are the mental health impacts on children of teaching them they are a part of a group rather than an individual, that their outcomes are determined by their status at birth, and that it is their moral responsibility to root out any and all perceived power differentials in society?

The issue is not whether Americans should strive for a just society, or if Connecticut schools should teach a complete history of America, including the numerous racist policies it has implemented. Our students should know the whole truth. Nor is the issue one of banning critical theories. Theories cannot be un-invented and intellectual inquiry is appropriate in education. The issue is not one of democracy. It does not matter whether a majority of voters favor or reject implementing Critical Pedagogy in schools, or which side wins the contested Guilford School Board contest.

The issue at hand is the First Amendment right to freedom of speech.

Public schools are the government. As such, they cannot control the speech of citizens. Freedom of conscience is inherent to freedom of speech; therefore, the government cannot compel anyone to accept a belief system. This principle has been upheld by the U.S. Supreme Court in their 1977 ruling, in the matter Wooley v. Maynard, which ruled that the State Of New Hampshire could not compel Jehovah’s Witnesses to display the slogan “Live Free or Die” on their license plate. Our schools cannot compel students to accept a belief system that the morality of society must be judged by the single framework of alleged power differentials among group identities.