The Writer Who Couldn't Answer Standardized Test Questions About Her Own Work (Again)! 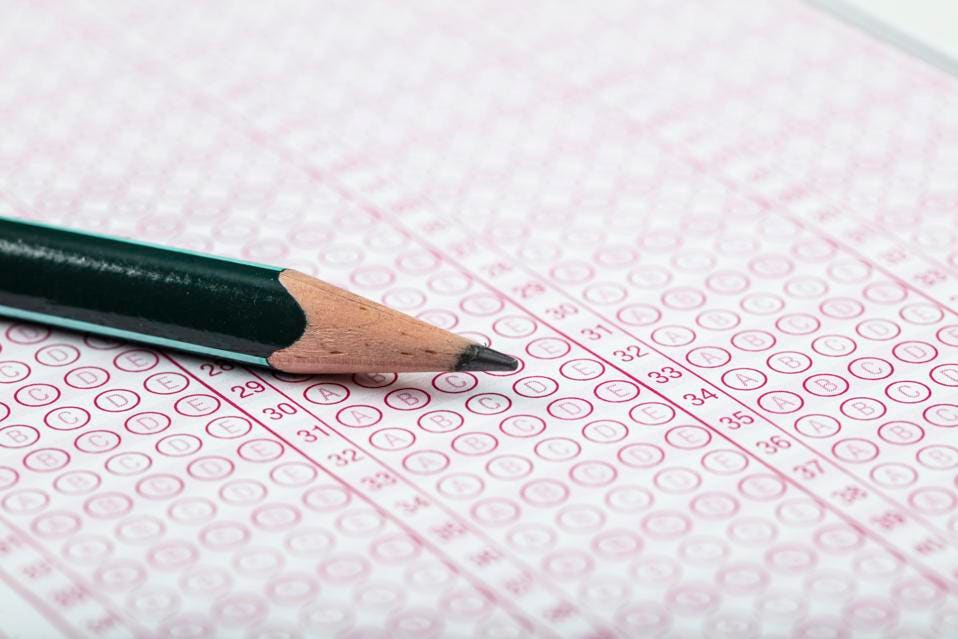 How much critical thinking is going on here?

We are in standardized test season, and all across the country, students are taking the Big Standardized Test by which they, their schools, and their teachers will be judged. How absurd are these tests? Meet Sara Holbrook, the writer who couldn't answer test questions about her own work.

Back in 2017, Holbrook wrote an essay for Huffington Post entitled, "I Can't Answer These Texas Standardized Test Questions About My Own Poems." The writer had discovered that two of her poems were part of the Texas STAAR state assessment tests, and she was a bit startled to discover that she was unable to answer some of the questions.

One reason was simple inaccuracy. One question asked why the poet had inserted a stanza break in a particular spot-- and then didn't insert a stanza break in the testing materials. But there was a second issue. Holbrook is a performance poet, and she had inserted the break at the point where, in live readings, she pauses. That choice was not one of the choices available on the test.

In fact, much of Holbrook's issue with the questions was a sort of existential dilemma. Several questions asked, directly or indirectly, for the test taker to judge the author's intentions. The author knew some of her intentions, sort of remembered others, and had others that were layered and complex. But the manufacturers of the test--who had never asked her about any of this--provided only four choices that did not allow her to choose the answer that she knew to be correct.

Now, it's possible that Holbrook is such an angsty, tortured soul of a poet that she simply does not know her own mind as well as the test manufacturers. But Holbrook does not fit the stereotypical faux image of a poet as a fuzzy-headed artiste. She has held writing jobs in the real world, such as Director of Communications for legal giant Jones Day and Public Information Officer for the public housing authority in Cleveland. She knows what it takes to succeed as a business writer, and she says, "the questions on these tests are not it." She works as an educator and consultant, bringing writing and performance skills into the classroom. Rather than conclude that she does not know her own work, we should instead conclude that the test designers write bad questions. Or as Holbrook herself puts it, "Anytime we ask questions about author intent, we have stepped off the pedagogical sidewalk and into muck."

I reached out to Holbrook recently because the same thing happened to her again. This time a poem of hers was included in a test prep package from Mentoring Minds, LP. The poem itself is called "Walking on the Boundaries of Change," from the book Walking on the Boundaries of Change, Boyds Mills Press, 1998. (Mentoring Minds LP is a Texas corporation, and the previous two poems included in the STAAR test are from the same book, so perhaps Holbrook has some Texas fans who are passing around one copy of her work.) The poem is printed here with the author's permission:

Walking on the Boundaries of Change

walking on the boundaries

mock or push each step.

It's a simple, sharp moment that captures an emotional picture in some simple images. It's hard to imagine dissecting this with test questions without beating some of the life out of it. Yet Mentoring Minds LD has come up with eight questions.

I cannot reproduce any of the eight questions accompanying the poem here, because the materials include a robust copyright notice that includes phrases such as "maximum extent of the law." But once again, the questions turn on the issue of word choice, central message, and which part of the poem does things "best," all of which hinge on the test taker's interpretation of the poet's intent. And all are multiple choice questions with four possible answers, the kind of test structure that, Holbrook says, causes "students to grow up believing the right interpretation of anything is out there on the internet, and to discredit their own thoughts."

Holbrook, as a poet and an educator, has several thoughts about remedies to these sorts of tests. "Parents, demand to see the test prep materials. Teachers, don't waste time on test prep: you can't teach nonsense. Administrators, take the money you are spending on test prep and spend it on classroom libraries instead. There are no quick fixes. Kids need to read and write voluminously." She advocates for transparency. "If a bike helmet fails to protect a child from injury, consumers can sue the manufacturer. These tests are injurious, but shrouded in secrecy and thereby beyond the reach of most teachers and all parents."

To approach any poem with the notion that each word has one and only one correct reading when language at its most rich involves shades and layers or meaning--what my old college writing professor called "the ambiguity that enriches"--is one way to stifle thinking in students. In many states, we are doing it in grades K through 12.

There are so many layers to Holbrook's situation. The test manufacturers could have contacted her and talked to her about her poem (though Common Core architect David Coleman would argue that doing so was both unnecessary and undesirable), but they didn't. So here we sit, in a bizarre universe where the test writer knows the "correct" answer for a question about a poem, but the person who wrote the poem does not. And at least Holbrook has the option of publicly saying, "Hey, wait a minute," which is more than the deceased authors used for testing can do. But she was only able to do so because somebody risked punishment by sharing test materials with her. Particularly ironic is Mentoring Minds' promise to build critical thinking skills in students, even as Holbrook, by taking reading, writing and speaking out to students in living, breathing, dynamic workshops, is doing far more to promote critical thinking than can be accomplished by challenging students to guess which one of four available answers an unseen test writer has deemed "correct."

I spent 39 years as a high school English teacher, looking at how hot new reform policies affect the classroom.