Why You Should Bet Against Your Candidate 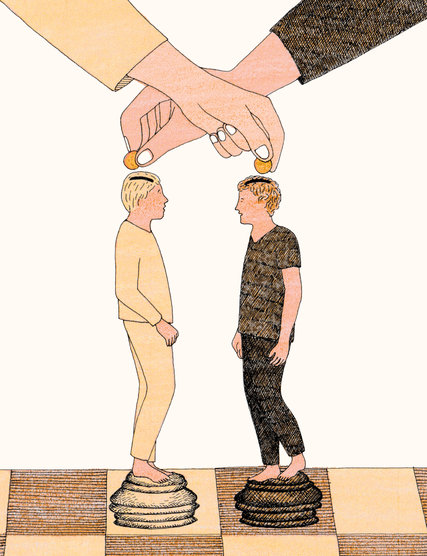 When your favorite sports team is defeated, you’re disappointed, even dismayed. The same is true when your preferred political candidate doesn’t win. It hurts when your side loses.

Fortunately, you can insure yourself against such unhappiness: just place a bet for your side to lose. This strategy, which has become easy to do with the rise of online prediction markets, creates a consolation prize — say, $1,000 (or whatever it takes) — to reduce your pain in the event of a defeat.

Logic strongly recommends this kind of emotional hedge. Consider that for most people, losing something hurts more than gaining that same thing feels good — a phenomenon known as loss aversion. Consider, too, that as losses and gains increase in size, each additional unit of loss or gain has a smaller impact on you — a phenomenon known as diminishing marginal utility. That is, $1,000 won’t feel as significant to you if it’s added to your satisfaction at Hillary’s Clinton’s victory than if it serves as some compensation for your disappointment in the event of Donald J. Trump’s win.

But in practice, as my colleagues Richard P. Larrick and Simone Tang and I demonstrate in a paper forthcoming in the journal Management Science, voters and fans turn out to be reluctant to accept emotional hedges.

Why? The reason, we found, isn’t a superstitious worry that such a bet will jinx the outcome. Nor is it that people are confident that their side will win. Rather, it seems people are reluctant to hedge because it feels disloyal.

A week before the 2000 United States presidential election, for instance, we asked more than 100 business school students at the University of Chicago to make a bet on the outcome. The bets were calibrated on a case-by-case basis to account for each student’s belief about who would win. If, for example, a student thought Al Gore had a 75 percent chance of winning and George W. Bush had a 25 percent chance of winning, she was offered one of two options: receive $10 if Gore won; or receive $30 if Bush won.

Each bet thus had (what an economist would call) the same expected value: $7.50. This ensured that optimism or pessimism about the student’s preferred candidate wouldn’t affect her choice — all that was relevant was whether she wanted to emotionally hedge the outcome of the election. But only 26 percent of the students, we found, chose to bet that their preferred candidate would lose. A vast majority — the other 74 percent — turned down that opportunity.

To see more clearly that what’s at work here is a reluctance to be disloyal, consider some other cases. In one experiment, we offered N.C.A.A. basketball fans who were about to attend a game a free $5 prize if their team lost. All they had to do was accept the hedge — there was no financial downside — but 46 percent turned it down.

But when, on another occasion, we asked N.C.A.A. hockey fans in Boston if they would take a bet that paid $5 to the humanitarian agency Doctors Without Borders if their team lost, nearly all of them (95 percent) accepted. When we offered them the same $5 bet, only with the money going directly into their own pockets, less than half (41 percent) accepted — even though of course they could have donated the money to charity themselves.

What appears to distinguish the two bets, in people’s minds, is that by profiting from our team’s loss we exhibit betrayal. When bets are irrelevant to people’s identity and sense of allegiance — for example, when betting on games of chance, or games featuring no favorite team — our studies show that people are perfectly happy to accept hedges and similar gambles.

Our findings may offer insight into some puzzling financial decisions from the real world, such as why people insufficiently diversify their investments. Employees who receive company stock, for instance, typically hold too much in their portfolio, exposing themselves to excessive risk. When Enron went bankrupt, its employees lost both their jobs and the large fraction (62 percent) of their 401(k)s that were invested in the company. Such reluctance to sell company stock may stem in part from an aversion to disloyalty.

Despite the unease you might feel about betting against your own company, candidate or team, you ought to consider hedging — it can have significant benefits down the road.

Carey K. Morewedge is an associate professor of marketing at Boston University.

A version of this op-ed appears in print on October 16, 2016, on Page SR9 of the New York edition with the headline: Why You Should Bet Against Your Candidate. Today's Paper|Subscribe