A new social ontology of government 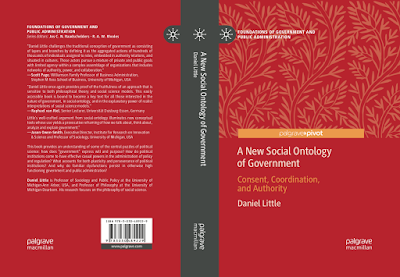 After several years of thinking about the nature of government as a network of organizations, I am happy to share the news that Palgrave Macmillan has published my short book, A New Social Ontology of Government: Consent, Coordination, and Authority (Foundations of Government and Public Administration). Thanks to Jos Raadschelders for proposing the book, and thanks to friends and colleagues at the University of Michigan, the University of Duisburg-Essen, the University of Milan, and Nankai University for helping me think through these new ideas. (What a great way to spend a year of sabbatical!)

My goal in this research was to approach the problem of analyzing the workings of government -- decision-making, regulation, knowledge-gathering, enforcement, coordination -- by making use of recent ideas about the nature of the social world in several disciplines. The result is an actor-centered social ontology that aims to take full advantage of recent frameworks of theory in sociology, political science, organizational studies, and philosophy.

Here is the brief description of the goals of the book:

This book provides a better understanding of some of the central puzzles of empirical political science: how does “government” express will and purpose? How do political institutions come to have effective causal powers in the administration of policy and regulation? What accounts for both plasticity and perseverance of political institutions and practices? And how are we to formulate a better understanding of the persistence of dysfunctions in government and public administration – failures to achieve public goods, the persistence of self-dealing behavior by the actors of the state, and the apparent ubiquity of corruption even within otherwise high-functioning governments?

I've tried to combine recent work in the philosophy of social science on the topic of social ontology (the nature of the social world), on the one hand, with recent developments in sociological theory about how to think about social entities. How do organizations and institutions work, from an actor-centered point of view? What do these features of ontology imply about the dynamics that governments are likely to display in routine times and moments of crisis? What is government, really?

Here is what I mean by "ontology" in this context.

What kind of things are we talking about when we refer to “government”? What sorts of processes, forces, mechanisms, structures, and activities make up the workings of government? In recent years philosophers of social science have rightly urged that we need to better understand the “stuff” of the social world if we are to have a good understanding of how it works. In philosophical language, we need to focus for a time on issues of ontology with regard to the social world. What kinds of entities, powers, forces, and relations exist in the social realm? What kinds of relations tie them together? What are some of the mechanisms and causal powers that constitute the workings of these social entities? Are there distinctive levels of social organization and structure that can be identified? Earlier approaches to the philosophy of the social sciences have largely emphasized issues of epistemology, explanation, methodology, and confirmation, and have often been guided by unhelpful analogies with positivism and the natural sciences. Greater attention to social ontology promises to allow working social scientists and philosophers alike to arrive at a more nuanced understanding of the nature of the social world. Better thinking about social ontology is important for the progress of social science. Bad ontology breeds bad science. (2)

These are empirical questions; but they are also conceptual and philosophical questions. And when we consider the scope, complexity, and fluidity of government agencies and institutions, it is clear that we need to make use of illuminating theories from sociology, organizational studies, and philosophy if we are to come to an adequate understanding of "government" as an extended social organization.

What I offer in the book is an approach to analyzing the ontology of government that proceeds from an actor-centered point of view. Government officials, functionaries, and experts are actors within organizations and institutional cultures; and government itself is a network of organizations that often proceed on the basis of independent and contradictory priorities and goals. Here is a brief description of the actor-centered approach to ontology that I have taken in this book:

Another important truth about government is that it is made up of actors—individuals who occupy roles; who have beliefs, interests, commitments, and goals; who exist within social relations and networks involving other individuals both within and outside the corridors of power; and whose thoughts, intentions, and actions are never wholly defined by the norms, organizational imperatives, and institutions within which they operate. Government officials and functionaries are not robots, defined by the dictates of role responsibilities and policies. So it is crucial to approach the ontology of government from an “actor-centered” point of view, and to understand the powers and capacities of government in terms of the ways in which individual actors are disposed to act in a range of institutional and organizational circumstances. Whether we think of the top administrators and executives, or the experts and formulators of policy drafts, or the managers of extended groups of specialized staff, or the individuals who receive complaints from the public, or the compliance officers whose job it is to ensure that policies are followed by insiders and outsiders—all of these positions are occupied by individual actors who bring their own mental frameworks, interests, emotions, and knowledge to the work they do in government. (3)

Fortunately, there are a number of important new theoretical tools and frameworks that assist in the project of analyzing the ontology of government. Fligstein and McAdam's formulation of the theory of strategic action fields is deeply helpful (A Theory of Fields). But so are the ideas associated with assemblage theory, synthesized by Manuel DeLanda (Assemblage Theory). And new contributions to organizational theory, including especially work by Scott and Davis (Organizations and Organizing: Rational, Natural and Open System Perspectives), shed a great deal of light on aspects of government action and functioning that are otherwise obscure.

The question of collective agency is an important topic to consider when analyzing the ontology of government. I argue that governments do indeed have a form of collective agency along the lines of the ideas expressed by List and Pettit (Group Agency: The Possibility, Design, and Status of Corporate Agents); but it is a conception of group agency that depends on the organized activities and plans of the actors who constitute various units of the organization. Moreover, I argue that the disconnects, inconsistent priorities, principal-agent problems, and conflicts of interest that arise within organizations pretty much ensure that governments and other mega-organizations are myopic and unsteady.

Now think of the possibilities of overlap, interference, and inconsistency that exist among the functionings and missions of diverse agencies. Each agency has its mission and priorities; these goals imply efforts on the part of the leaders, managers, and staff of the agency to bring about certain kinds of results. And sometimes—perhaps most times— these results may be partially inconsistent with the priorities, goals, and initiatives of other governmental agencies. The Commerce Department has a priority of encouraging the export of US technology to other countries, to generate business success and economic growth in the United States. Some of those technologies involve processes like nuclear power production. But other agencies—and the Commerce Department itself in another part of its mission—have the goal of limiting the risks of the proliferation of technologies with potential military uses. Here is the crucial point to recognize: there is no “master executive” capable of harmoniously adjusting the activities of all departments so as to bring about the best outcome for the country, all things considered. There is the President of the United States, of course, who wields authority over the cabinet secretaries who serve as chief executives of the various departments; and there is the Congress, which writes legislation charging and limiting the activities of government. But it is simply impossible to imagine an overall master executive who serves as symphony conductor to all these different areas of government activity. At the best, occasions of especially obvious inconsistency of mission and effort can be identified and ameliorated. New policies can be written, memoranda of understanding between agencies can be drafted, and particular dysfunctions can be untangled. But this is a piecemeal and never-complete process. (5)

The book pays attention to the forms of dysfunction that can be seen to arise within organizations and networks of organizations, given the nature of the actor-centered activity that they encompass. (Other experts on organizational dysfunction include Charles Perrow (Normal Accidents: Living with High-Risk Technologies) and Diane Vaughan (The Challenger Launch Decision: Risky Technology, Culture, and Deviance at NASA).) So the occurrence of corruption, failure of execution, short attention span, inadequate communication, and inconsistency of effort across related agencies are dysfunctional, but can be seen to be as natural to organizations as friction is to mechanical devices. Here is the general view of dysfunction that is developed in the book:

This chapter focuses on a key consequence of the social realities of government presented to this point: the fact that agencies and bureaucracies represent loosely-linked groups of actors who have a variety of different interests, only imperfectly subject to control by the central executive. This is the key theme of the “natural systems” approach to organizations described in Chapter 4. This unavoidable looseness of bureaucratic organization creates the possibility of several kinds of lack of coherence between government’s intentions and the actual activities of agencies and departments. The chapter introduces the idea of a principal-agent problem and demonstrates that this is an unavoidable feature of organizational functioning. It also applies the idea of “loose coupling” to the challenges associated with inter-agency collaboration. And it touches on an important problem at the level of the actor, the problem of conflict of interest and commitment. The chapter considers a range of organizational mechanisms aimed at enhancing internal controls and compliance. (92)

Government is essential to preserving and enhancing the public good in a complex, interdependent society. In order to bring about effective formulation and implementation of public policy, regulation, enforcement, and protection of the health and welfare of the public, it is crucial to have a realistic understanding of how organizations work, and what can be done to make them as effective as possible. And we need to have an honest understanding of the features of organizational behavior that lead to dysfunction if we are to have any hope of creating governmental (and private) organizations that can truly be described as "high-reliability organizations" (link). Fundamentally this book offers a conception of government as a network of organizations, loosely coupled and subject to imperfect executive management. The key challenge for elected leaders and government officials and experts is how to navigate the limitations of large organizations while achieving the larger part of an agenda for the public good.