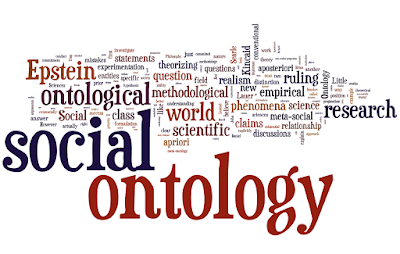 However, in recent years, many works of social ontology have embedded a new type of claim in their works that differs from the conventional discussions of social ontology. These new claims are a series of methodological claims about the role and importance of ontology in conducting social scientific research. Unlike conventional claims about ontology that try to answer substantive questions about the nature of the social world, these methodological claims ask why ontology matters and what role ontology should play in the conduct of social science research. Here is an example of Brian Epstein making such a claim in his work, The Ant Trap: Rebuilding the Foundations of the Social Sciences:

Ontology has ramifications, and ontological mistakes lead to scientific mistakes. Commitments about the nature of the entities in a science—how they are composed, the entities on which they ontologically depend—are woven into the models of science.…despite Virchow’s expertise with a microscope, his commitment to cell theory led him to subdivide tissues into cells where there are none. And that led to poor theories about how anatomical features come to be, how they are changed or destroyed, and what they do. (Brian Epstein, The Ant Trap: Rebuilding the Foundations of the Social Sciences (Oxford: Oxford University Press, 2015, 40-41))

Notice how in this passage Epstein makes a claim about why ontology is important and, consequently, tacitly takes a stance on a methodological relationship between ontology and research. According to Epstein, ontology matters because ontology shapes the very way that we investigate the world. He believes that bad ontology leads researchers into scientific mistakes because ontology distorts a researcher’s ability to objectively investigate phenomena. Epstein’s evident unstated conclusion here—which is never explicitly formulated in his book, even though it is a very important underlying premise in his project—is that ontological theorizing must take methodological priority over scientific experimentation. As Epstein might sum up, we ought to think about ontology first, and then conduct research later.

Yet Epstein’s statement is not the only way of construing the relationship between ontology and research. Epstein’s unstated assumption that ontological work should be done before research is a highly contested assertion. Why should we just accept that ontology should come before empirical research? Are there no other ways of thinking about the relationship between ontology and social science research? These methodological questions are better suited being treated as separate, distinct questions rather than being embedded within the usual set of conventional questions about social ontology. There should be a conceptual distinction between the conventional claims about social ontology that actually engage with understanding the social world, and these new kinds of methodological claims about the relationship between ontology and research. If we adhere to such a distinction, then Epstein’s methodological claims do not belong to the field of social ontology: they are claims about meta-social ontology.

Let’s spend some time examining both questions, as well as proposed answers to each question.

The first question is a clear formulation of the kind of question that Epstein wants to answer in his book. There are two typical approaches to answering this question. Epstein’s approach, that ontological theorizing must occur prior to and outside of scientific experimentation, is called apriori ontology. Apriori ontology argues that ontology can be successfully crafted through theoretical deductions and philosophical reasoning, and that it is imperative to do so because ontological mistakes lead to scientific mistakes. Here is another philosopher, John Searle, supporting the apriori social ontology position:

I believe that where the social sciences are concerned, social ontology is prior to methodology and theory. It is prior in the sense that unless you have a clear conception of the nature of the phenomena you are investigating, you are unlikely to develop the right methodology and the right theoretical apparatus for conducting the investigation. (John Searle, “Language and Social Ontology,” Theory and Society, Vol. 37:5, 2008, 443).

Searle’s formulation of apriori ontology here gives an explicit methodological priority to ontological theorizing. In other words, he believes that the correct ontology needs to be developed first before scientific experimentation, or else the experimentation will be misguided. No doubt Epstein agrees with this methodological priority, but he does not explicitly state it. Nevertheless, both Searle and Epstein are clear advocates of the apriori ontology position.

I believe that ontological theorizing is part of the extended scientific enterprise of understanding the world, and that efforts to grapple with empirical puzzles in the world are themselves helpful to refine and specifying our ontological ideas…. Ontological theories are advanced as substantive and true statements of some aspects of the social world, but they are put forward as being fundamentally a posteriori and corrigible. (D. Little, “Social Ontology De-dramatized,” Philosophy of the Social Sciences, I-11, 2020, 2-4)

Unlike apriori ontology, aposteriori ontology does not look at ontology as being prior to scientific research. Instead, aposteriori ontology places scientific experimentation alongside ontological developments as two tools that go hand-in-hand in guiding our understanding of the social world. In sum, the apriori vs. aposteriori debate revolves around whether ontology should be seen as an independent, theoretical pursuit that determines our ability to investigate the world, or if ontology should be seen as another collaborative tool within the scientific enterprise, alongside empirical research and theory formation, that helps us advance our understanding of the nature of the social world.

The second question in the field of meta-ontology is a question of existential commitment: to what extent do we need to actually believe in the existence of the ontological statements we posit about the world? This is less complicated than it sounds. Consider this example: we often talk about the notion of a “ruling class” in society, where “ruling class” is understood as a social group that wields considerable influence over a society’s political, economic, and social agenda. When we employ the term “ruling class,” do we actually mean to say that such a formation really exists in society, or is this just a helpful term that allows us to explain the occurrence of certain social phenomena while also allowing us to continue to generate more explanations of more social phenomena? This is the heart of the second issue in meta-ontology.

Similar to the apriori vs. aposteriori debate, proposed answers to this question tend to be dichotomous. The two main approaches to this question are realism and anti-realism (sometimes called pragmatism). Realism asserts that we should be existentially committed to the ontological entities that we posit. Epstein, Searle, and Little are among those who fall into this camp. Here is Epstein’s approximate formulation of realism:

What are social facts, social objects, and social phenomena—these things that the social sciences aim to model and explain?… How the social world is built is not a mystery, not magical or inscrutable or beyond us. (Epstein, The Ant Trap, 7)

As Epstein expresses here, realists believe that it is possible to discover the social world just as scientist discover the natural world. Realists maintain that their ontological statements about the world reflect social reality, meaning that the discovery and explanatory success of the “ruling class” hypothesis is like finding a new theory of the natural world.

Contrarily, anti-realists/pragmatists argue that ontology is only useful insofar as it advances scientific inquiry and enables successful inferences to a larger number of social phenomena. They do not believe that ontological statements reflect social reality, so they are not existentially committed to the truth of any particular ontology of the social world. Richard Lauer, a proponent of an anti-realist/pragmatist meta-social ontology, defines it like this:

The function of these statements is pragmatic. Such statements may open new possibilities that can further scientific aims, all without requiring a realist attitude…instead of concerning ourselves with whether there really are such [things], we may ask about the empirical merits of moving to [such] a view. (Richard Lauer, “Is Social Ontology Prior to Social Scientific Methodology,” Philosophy of the Social Sciences, Vol. 49:3, 2019, 184)

Taking the ruling class example above, an anti-realist/pragmatist like Lauer would suggest that the concept of ruling class is useful because it allows us to generate more explanations of social phenomena while rejecting the idea that there is such a thing as “ruling classes” that actually exists.

There is, however, some room for middle ground between realism and anti-realism. Harold Kincaid, another well-known philosopher of social science, has tried to push the realism/anti-realism debates in a more fruitful direction by asserting that a better way to answer the question is by addressing the question towards empirical research in specific, localized contexts:

I think we can go beyond blanket realism or instrumentalism if we look for more local issues and do some clarification. A first step, I would argue, is to see just when, where, and how specific social research with specific ontologies has empirical success…The notion of a ‘ruling class’ at certain times and places explains much. Does dividing those at the top differently into ruling elites also explain? That could well be the case and it could be that we can do so without contradicting the ruling class hypothesis…These are the kind of empirical issues which give ‘realism’ and ‘pluralism’ concrete implications. (Harold Kincaid, “Concrete Ontology: Comments on Lauer, Little, and Lohse,” Philosophy of the Social Sciences, I-8, 2020, 4-5)

Kincaid suggests here that a better way of arguing for the efficacy of a realist or anti-realist meta-ontology is by looking at the particular success of specific ontological statements in the social sciences and thereby determining an answer from there. Taking our ruling class example, Kincaid would suggest that we investigate the success of the ruling class hypothesis in localized contexts, and then from there evaluate our existential commitment to it based on its ability to successfully explain social phenomena and provoke new research regarding new social phenomena. This is still a clear endorsement of realism with respect to social concepts and entities. However, it pushes the conversation away from blanket realism (like Epstein) and blanket pragmatism (like Lauer). Instead, Kincaid emphasizes the interaction of empirical research on the subsequent development of our realist/anti-realist meta-ontological position towards specific social phenomena. Thus, as Kincaid sums up his position, “we need to get more concrete!” (Kincaid, 8).

So, there are many ways one can think about the methodological relationship between social ontology and social science research. If we were to categorize the philosophers discussed here, it would look like this: