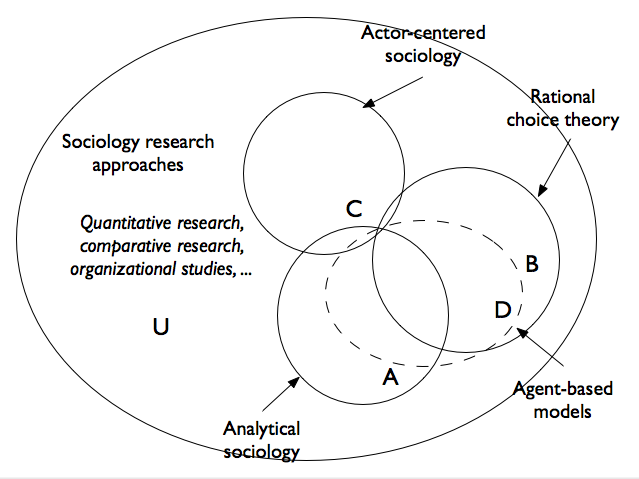 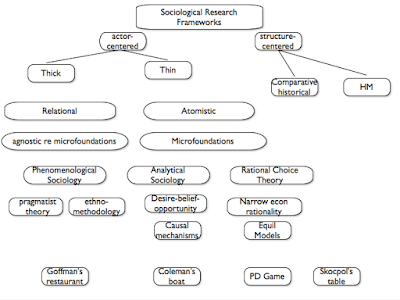 There are a number of approaches to the study of the social world that give special priority to individuals in social settings. Rational choice theory and game theory (Becker, Harsanyi) attempt to understand social outcomes as the result of the strategies and calculations of rational actors. Actor-centered sociology and pragmatist theory attempt to uncover a deep understanding of the actor’s frameworks and modes of action (Goffman, Gross). Analytical sociology attempts to work out the logic of Coleman’s boat by showing how macro-level social factors influence the behavior of individuals and how macro factors result from the interactions of individuals at the micro level (Hedstrom, Ylikoski). And agent-based models provide computational systems for representing the complex forms of interaction that occur among individuals leading to social outcomes (Axelrod, Manzo).

All four approaches appear to pursue much the same basic strategy: derive social outcomes from what we know about the action models and composition of the individuals who make up a social setting. It is tempting to see these as four different formulations to the same basic approach. But this would be a mistake. The scientific distance between Hedstrom and Goffman, or Goffman and Becker, is great. RCT, AS, and ACS bring different assumptions to the study of actors and different assumptions about what a social explanation requires. They are different research paradigms and give rise to qualitatively different kinds of research products. And ABM is a tool that can be deployed in each of these frameworks but is most suited to AS and RCT.

This picture implies that the agent-centered approaches have more in common with each other than any of them do with other important strands of social science research methodologies. Can we codify these intuitions in some way? And can we sort out the logical and pragmatic relations that exist among these approaches?

Here is a table that represents some of the central methodological and ontological assumptions of each of these research frameworks.

The second diagram provides an initial effort to identify the distinguishing features of the several approaches as a dichotomous tree structure. AS and RCT share the microfoundations characteristic, whereas the phenomenological approach does not. The phenomenological approach emphasizes the need for a "thick" theory of the actor, whereas AS and RCT favor a thin theory. AS distinguishes the DBO assumption from the even more restrictive assumption of narrow economic rationality. And AS is more interested in identifying causal mechanisms than either alternative, whereas the phenomenological approach favors narratives and the RCT approach favors the creation of equilibrium models. The final row of this diagram provides instances of explanatory paradigms for the various approaches -- Goffman's account of the social behaviors in a restaurant, Coleman's boat, the formal analysis of the prisoner's dilemma, and Skocpol's table of revolutionary outcomes.

Here is another possible approach, which might be described as the "ecological" view of methodologies. In a recent post I argued that we might think of a research framework as consisting of a small set of “genes” (methodological and ontological assumptions), which then give rise to the “phenotype” of research products in the hands of groups of researchers (link).

On this way of thinking, AS and RCT share a number of genes in common, and they are open to borrowing additional elements in the future through research collaboration (inter-species contact). Each shares some of the core commitments of actor-centered sociology, even as they postulate theoretical and explanatory strategies fairly distant from the key practitioners of ACS. The two “species” of research frameworks are closely related, and show promise of becoming more so in the future. But likewise, AS can become a more robust genotype for sociological research by sharing genetic components with its ecological partner, actor-based sociology. Finally, by this measure all three of these actor-based approaches are some distance from other main research approaches within sociology: survey science, quantitative research, comparative research, and organizational studies.

I would like to argue that analytical sociology has the intellectual breadth to encompass the core insights and methods of RCT and ACS as distinct theories of the actor, and that ABM is a formal methodology that is well suited to one component of the AS model of explanation, the aggregative component (the rising strut of Coleman’s boat). ABM is not limited to economic models of the actor and can incorporate as much detail about the actor as the modeler chooses; so ACS and pragmatist findings can be incorporated into ABM models at the possible cost of a loss of determinacy of outcome.

It appears to me that agent-based models represent something different from the three frameworks considered here. ABM approaches do not inherently privilege any specific model of the actor. Most current models make use of actors who are economically rational; but it would be equally consistent to assign formal interpretations to the premises of pragmatist theories of the actor and then embody those premises within an ABM model. So ABM is a formal technique for aggregating assumptions about the actions and interactions of actors, not a substantive theory of what makes the actor tick. This observation is recorded in the Venn diagram above, with the circle representing ABM approaches overlapping will all three substantive frameworks.