Despise the belief, not the person: raising compassionate kids in the face of hate

Despise the belief, not the person: raising compassionate kids in the face of hate

As a female couple with two young kids we try to navigate the marriage equality debate. And we want our kids to choose nuance over black and white thinking 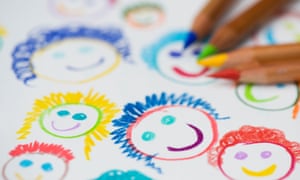 ‘We explain that people aren’t bad or good, but beliefs can be. That all people are equal but ideas aren’t.’ Photograph: Alamy Stock Photo
Sunday 27 August 2017 19.00 BST

We’re in our family car. My wife is driving, our kids – eight and four – are bickering in the back, and we’re running late (again!) for Saturday morning kids’ activities. We’re a modern cliche.

At the roundabout near our home, we come across a loud crowd. It’s a marriage equality protest. The missus looks at me, alarmed, ready to change routes. Protect the kids! But it’s a “pro” group with big “yes” signs. We relax.

As we beep and wave at the crowd, our eight year old takes it all in and declares: “I think they’re nice people.”

You see, the missus and I are a female married couple, trying to navigate the “marriage equality” public vote. We were married in Canada surrounded by 100 friends and family and now live in Australia. Our kids were flower girls at our wedding.

It would be easy just to reply to our daughter, “Yes. They’re nice people.” But lurking behind her statement is her belief, slowly and frighteningly fermenting in her prepubescent brain, that supporters are nice and … non-supporters are “not nice”. That they are “bad”. She already calls the government “poo-poo heads” to express her bewilderment that that they are allowed to, in her words, “unmarry us”.

It’s so tempting to let her believe it. The other “side” (it’s easy to pretend there are only two) is dangerous to us. It would be so easy to give in to our deep, primordial instinct to protect our children at all costs, to preach with fury: “They’re evil! Dangerous! Keep away!”

But that will hurt our kids, not protect them, in the long run. We believe in compassion, mutual respect and kindness. Critical thinking and emotional intelligence. We want to raise our kids to be decent human beings who choose complexity and nuance over the black-and-white thinking that seems to have gripped the world.

So we turn off the car radio and suggest that, yes, the protestors are nice, but that also people who don’t support us are not necessarily “bad” or “not nice”. We even have friends who don’t support our marriage, we tell her.

She sits bolt upright, completely flummoxed. “What?!” she exclaims, eyes wide. “Why? How is that possible?”

For a moment, I see our values through her eyes and they do seem ridiculous.

But this matters. We don’t want her to be hated, but nor do we want her to learn to hate others. Or to learn hate’s flipside – fear. She’s young and impressionable. We have to guard her soft heart and her open mind, keep them from hardening and scarring over. Somehow, we have to teach her respect, even when her family is not treated respectfully. Safeguard against the mental binaries of right and wrong, good and evil. Discourage her kneejerk reaction to protect herself by labelling others as enemies.

So, together, tentatively, we answer her. Sometimes we have friends we disagree with, we explain. Who do things we don’t like. Sometimes we understand why they think the way they do, and sometimes we don’t. But we can still be civil to each other, and in some cases, when there’s mutual respect and goodwill, friends.

“But you don’t get to vote on their lives” she points out. Like most eight year olds, she demands that everything be fair and just, and she sees this is neither. It’s the stark truth and we’re momentarily silent, processing our own rage. As cathartic as ranting might be, we don’t want to lock her views into place with our own strong emotions.

Calmly, improvising because you can’t practice for this, we agree it’s colossally unfair. We explain that people aren’t bad or good, but beliefs can be. That all people are equal but ideas aren’t. We can hate a belief without hating the person. That some people are better at imagining other people’s perspectives than others. Too much for an eight year old, but we’re planting seeds that will grow as she does. She chews on what we say thoughtfully.

Eventually, we find something that resonates.

“People often believe what they’ve been taught and some people grew up being taught that same-sex marriage is wrong. Some people have had a good reason to unlearn that. Other people haven’t. Yet.”

It’s imperfect and incomplete, but it offers up the possibility of change and growth. It disentangles people from their beliefs at any given time. Most importantly, it strikes a chord.

“Oh. OK,” she says, relaxing. “Like … I used to think the whole world was one country. But then I learned there’s lots of countries.” She sinks back into her seat.

Our four year old chimes in to explain that she likes the swing and her kindy friend likes the slide, but they’re friends even though they’re different. It’s simple for her; it’s us adults who make it complicated.

The conversation drifts to other topics: their costumes for book week, what we’re having for dinner.

The missus and I squeeze hands and let out a breath – we’ve survived one more difficult conversation on the path to adulthood.

Is it enough? We don’t know. Our kids are young, and parenting is nothing if not a long game. But we can only do what we can do: keep our kids close, answer their questions as honestly as we can, and love them truly, madly, deeply. Hoping, praying, that somehow we’ll work it out.

As we drive, we watch carefully for more protestors. Just because we care about respect and compassion doesn’t mean we’re going to let anyone hurt our precious children.

And if we have to divert, we will.