О психическом здоровье Д. Трампа / The Elephant in the Room

The Elephant in the Room 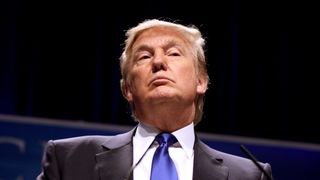 In late 2015, we authors (Phil and Rose) commenced what would become an on-going conversation about then Republican presidential candidate Donald Trump’s mental health. We were concerned that, given his “straight forward” or outsider presentation and charisma, he would appeal to people that were unaware of the dangers of his obvious personality type—narcissistic megalomaniac—and the many offensive behaviors that accompany it. These behaviors include but are not limited to: condescension, gross exaggeration (lying), bullying, jealousy, fragile self-esteem, lack of compassion, and viewing the world as Us versus Them. Having observed the school-yard bully tactics Trump employed during a series of public debates as well as his blow-hard presentation during interviews, we felt it important to raise awareness about some of his behaviors. So in January 2016, we published Bullies: An exploration into different types of bullies. Note: Our intention was to use a picture of Donald Trump to make our point but were dissuaded due to the possibility of offending some of our Psychology Today readers who were also his supporters and so opted for a generic-looking meanie as our bully poster boy.

As Trump’s campaign gained momentum and his narcissism exploded, so did our courage. In March 2016 we published The Narcissistic Personality: How to spot a narcissist. In the article we shared clinically documented narcissistic behaviors and hoped it would be easy for readers to see that Trump fit every single example to a "T". And this time we used his photo. Shortly after publication, the editors at Psychology Today promoted our article to an "Essential Topic" which is where you want to be; it means your column is placed in the top four articles for a few days, pretty much assuring you of many more reads than you’d usually get. We were ecstatic! Now, whoever went to Psychologytoday.com would see our article front and center and be more likely to click and read about Trump’s narcissistic behavior! But strangely, within a couple of hours of being Up, it was Downed! The article was taken out of "Essential Topics" and demoted to "The Latest", which is where all published articles live, and die. We were never given an explanation as to why this happened. But we deduced we had stepped on some toes, or some political pressures were being applied, or anticipated, at PT.

On January 31 of this year, Psychology Today’s Editorial Staff published Shrinks Battle Over Diagnosing Donald Trump: Chaos in the White House fuels discord amongst the experts. The article leads with author John Gartner’s (Ph.D., psychology) petition declaring Trump has “a serious mental illness that renders him psychologically incapable of competently discharging the duties of President of the United States.” Gartner is an author and former professor of psychiatry at John Hopkins, currently in private practice in New York and Baltimore. To date, more than 26,000 psychologists, psychiatrists, and other mental health professionals have signed the petition, which has no legal power but does drive home the point these professionals are gravely concerned about the mental health of this president. But the point of this well-written article is highlighting the conflict going on in the mental health field: While some believe it is possible to diagnose through observation, some feel it is unethical and inappropriate to do so, while still others question whether or not psychology should be used to address issues of governance.

One journalist, Lawrence O’Donnell, has taken it upon himself to champion Gartner’s effort to help educate the public. Last week on O’Donnell’s program, The Last Word, Gartner along with Lance Dodes, MD, Harvard Medical School Professor of Psychiatry (retired), appeared in a segment titled Mental Health Experts say Donald Trump is Unfit to Serve. Gartner contends that mental health professionals have a duty to warn the public of dangerous people in their midst. He states, “We know now that if we can observe someone’s behavior and words…we can diagnose them…the idea that the psychiatricinterview is the gold standard for assessment is frankly not true; its behaviors and informants, and obviously we have thousands of hours of (Trump’s) behavior and informants…” Gartner went on to say, “As far as ethics go, I would argue with my colleagues that those that don’t speak out are being unethical. That if we have knowledge and understanding about the unique danger that Donald Trump presents through our psychiatric training and we don’t say something about it, history is not going to judge us kindly.”

Dodes, adding the weight of his Harvard background, was asked to watch a much-played video clip of Trump during a debate claiming he lost hundreds of friends during the 9-11 World Trade Center disaster. O’Donnell asked Dodes, “What would you call that?” Dodes replied, “Well, it’s lying but there are two pieces to it…One is that he lies because of his sociopathic tendencies…he lies in the way anyone who scams people does; that he’s trying to sell an idea or a product by telling you something that’s not true. There’s that lying. There’s also the kind of lying that he does that is, in a way, more serious. That he has a loose grip on reality. Because he lies about things that aren’t even that important to him, like the Electoral College majority. And he’s been told that it’s not true but he keeps doing it. What that indicates is that he can’t stand an aspect of reality that he doesn’t want, so he rejects it. His grasp of reality, his attention to it, is loose; an extremely dangerous trait in a president. And that makes him unqualified.”

Both Gartner and Dodes agreed that as far as the depth of mental illness, this is the "worst case" scenario. “He’s just sane enough to ‘pass’ but detached from reality,” said Gartner. “So that what is ‘real’ is fluid…it’s totally malleable according to his personality disorder. And so you have someone handling the nuclear codes who is not in touch with reality and who’s paranoid. Who actually imagines he is under attack by people who are not actually attacking him. Then what you have is a very dangerous combination of someone who can act on his paranoid fantasies in a way that can have catastrophic consequences.”

The Elephant in the Room

O’Donnell was so fascinated by the topic, the following day, he interviewed author Lee Siegel. Siegel recently wrote an article, Avoiding questions about Donald Trump’s mental health is a betrayal to public trust, for the Columbia Journalism Review. Dr. Lance Dodes was once again part of the interview. While we won’t go into detail as we did above, it’s important for us to note that Siegel wrote, “Mental illness does not need to be professionally diagnosed. We don’t need to be told by a doctor that the guy coughing and sneezing at the other end of the train car is probably sick, though we don’t know if it is a cold, the flu, bronchitis, pneumonia, or an allergy…When someone is compulsively lying, continuously contradicting himself, imploring the approval of people even as he is attacking them, exalting people one day and abusing and vilifying them the next, then the question of his mental state is moot. The safe thing to do is not just to stay away from him, but to keep him away from situations where he can do harm.”

Both of these enlightening segments can be viewed here; search Mental Health Experts say… and Trump’s Mental Health: The Elephant…

Through our observations, we can diagnose Trump in the terms of the special therapy we developed, Time Perspective Therapy, as being an unconstrained present hedonist – living only in the present moment, saying whatever it takes to pump up his ego and assuage his inherent low self-esteem, without thought of past reality or potentially devastating future consequences. He is the poster boy for a time perspective that is totally unbalanced. Unfortunately, given his personality type, there is no hope of reversal and little for any meaningful improvement.

What can we do? Be observant. Be vigilant. Share this article to spread awareness. Write or call your elected government officials and state your concerns about Donald Trump’s mental health. And hope that with the backing of 26,000 mental health therapists (a number that grows every day as last month the number was 18,000!) agreeing that he is mentally unfit to be President of the United States, that we will have a new, mentally fit president as soon as possible by some means of judicially appropriate political action.

No matter for whom you voted in this election, or if you didn’t vote, we the people (or at least the majority of Electoral Colleges in some red states) did this. We need to correct this threat to our ecology, our society, our international relations, and our world peace, sooner than too later.